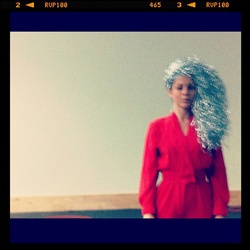 Kate Watson-Wallace is a choreographer and visual artist. She has received numerous awards for her choreography including: A Pew Fellowship in the Arts in Choreography, two Map Fund Grants and a Doris Duke Exploration grant through Creative Capital, multiple grants from the Pew Center for Arts and Heritage through Dance Advance, The PA Council on the Arts, The Independence Foundation and Penn PAT. She has choreographed music videos for: Black Dice and Animal Collective. Recent Commissions include: Ballet X, Hotel Monoco/Kimpton Hotels, RedBull Art-of-the-Can, and Meredith Rainey/Carbon Dance Theater.

Kate has performed in every newMoves Contemporary Dance Festival (2009–2012) at Kelly Strayhorn Theater. She also performed STORE at KST in November 2012.

She is currently creating Mash Up Body, a new installation under the Mentorship of Miguel Gutierrez that will premiere at Kelly Strayhorn Theater in April 2013 spring, where she is in residence for the year.