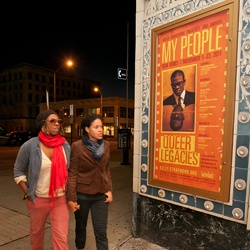 Explore the life experiences of queer people of color through award-winning films, performances and discussions at the 7th annual My People series. Presented by Kelly Strayhorn Theater, My People seeks to affirm underserved and underrepresented groups and help identify strong, active, and vibrant communities.

All tickets are Pay What Makes You Happy.

Join us for a preview of the films and performances slated for My People 2015, as well an opportunity to interact with the Roots Pride 2015 committee in an open discussion on LGBTQIA resources, and plans for the next iteration of Roots Pride.

#blackmendream (2014) is an experimental documentary that creates a virtual “safe space” through hashtagging, enabling black males to pull apart emotional restrictions often denied through crossroads of race and gender. The film, shot in black and white, features nine males from diverse backgrounds with their backs turned away from the camera. They openly discuss the obstacles they have faced as young black men, such as depression, parental neglect and racial discrimination. 45 minutes.

Featuring special guest and filmmaker, Shikeith. All are welcome to join the screening via Google Hangout. Watch the film, meet the filmmaker and join the discussion.

Through poetry and storytelling, Ọya: Something Happened on the Way to West Africa! pushes the boundaries of documentary filmmaking, exploring the complex interplay of mythology, gender dynamism, history and psychology in contemporary Nigeria. Cinema verite and traditional interviewing techniques come together in a lyrical poem that reveals a rarely-seen world. Layers of images and audio resonate with truth as audiences peer into the sensuous, under-explored world of Yorùbáland ritual practice through never before seen footage. 30 minutes.

Vow of Silence tells the story of Jade, a heartbroken composer who takes a vow of silence to win back the heart of Isis, her true love.  In her struggle to reconnect with Isis, she meets Jaxson-an outgoing musician. Utilizing music, magic and silence-Jade finds her voice in the place she least expects it. Vow of Silence is a music driven story, placing queer women of color at the center of the narrative. In her inability to speak-Jade communicates her pain, weakness, power and joy through music. An original score by Be Steadwell and live music narrate Jade’s journey. 28 minutes.