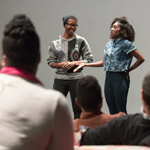 With inspiration from the life of KST’s namesake Billy Strayhorn, My People kicks off three weeks of conversation, film and performance centered on the lives of LGBTQ people of color. Week one includes an open-format conversation—including the organizers of Pittsburgh’s first-ever Roots Pride—and sneak previews of this year’s films.

Presented as part of My People—a series of screenings, performances, and discussions exploring the life experiences of queer people of color.