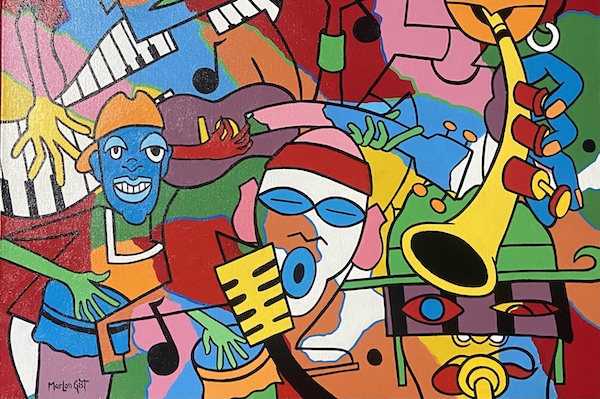 Kelly Strayhorn Theater is delighted to partner with Women of Visions, Inc. in celebrating their 40th anniversary! Together, we mark the occasion with MAGNIFICENT MOTOWN! Art Inspired by the Music, an exhibition from WoV inspired by the revolutionary musical genre. Artists will interpret the titles of Motown songs they love into physical artworks. For millions the world over, Motown music is magnetic, mobilizing, and most importantly, a cause for celebration. Come celebrate 40 creative years with WoV! This is notably the first show in WoV’s 40 year history to include male identifying artists.

Women of Visions (WoV) was co-founded in 1981 by a diverse group of African American women in Pittsburgh looking for opportunities that had not been afforded to them in the traditional art world. Over subsequent decades, WoV has sponsored, curated, or been represented by members and former members in hundreds of exhibitions, many of national and international acclaim.

Stop by for the opening for our Juneteenth Celebration (Saturday, June 19) and see the virtual remarks from Women of Visions members, announcement of artist awards, and shop the ORGINS marketplace, a multifaceted effort driven by Bridgeway Capital’s Creative Business Accelerator to foster a cohort of regional Black makers, designers, artists, and craftspeople starting and sustaining creative businesses in the Pittsburgh area.

MAGNIFICENT MOTOWN! is made possible with support from The Pittsburgh Foundation, Bridgeway Capital, and in partnership with the Rivers of Steel Heritage Area. Funding was provided in part by a grant from the Pennsylvania Department of Conservation and Natural Resources, Bureau of Recreation and Conservation, Environmental Stewardship Fund, administered by the Rivers of Steel Heritage Corp.

Women of Visions (WoV) was co-founded in 1981 by a diverse group of African American women in Pittsburgh, Pennsylvania, looking for opportunities that had not been afforded to them in the traditional art world. In 1990, the organization was incorporated under the name Women of Visions, Inc., which achieved non-profit status in 1995. Over subsequent decades, WoV have sponsored, curated or been represented by members and former members in hundreds of exhibitions, many of national and international acclaim. In addition to our community outreach, through collaborative programming, and progressive arts opportunities, members have enriched all generations ranging from K-12 to senior adults.

​The members of Women of Visions, Inc. work in a variety of artistic mediums, which include: Painting, fiber art, collage, mixed media, printmaking, photography, ceramics, jewelry-making, and three-dimensional works. Several of our members regularly act as teaching artists and are registered with our host organization, the Pittsburgh Center for the Arts School, registered by the Pennsylvania Council on the Arts.