Jasmine Hearn on [text me when you get home]

By: By Jasmine Hearn 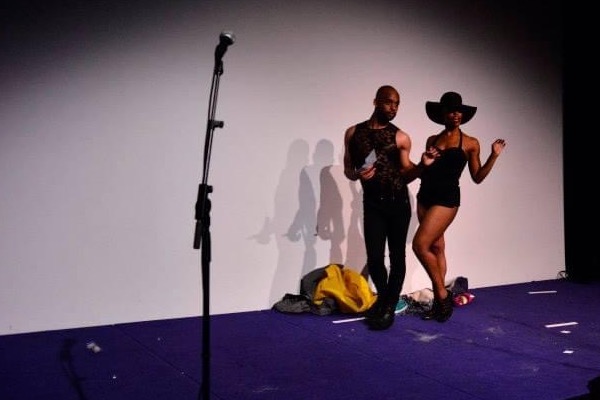 Contextual writing from Jasmine Hearn concerning [text me when you get home] the upcoming Artist Talk with Joseph Hall.

Joseph Hall and I met a lesbian dance party in 2011 or maybe in the lobby of the Kelly Strayhorn Theater. If the first, I was in complete shock that he won first place in the dance competition that we both had entered into. I placed second. If the second, I was in complete admiration of this person who cared so deeply for artists and order.

Joseph and I kept meeting on dance floors from then on at SAPPHO — a bimonthly queer dance party … at post show dance parties at the Kelly Strayhorn… at protests.

We found each other in sweat in joy in movement together spinning in the night.

As I continue my residency at Kelly Strayhorn Theater with A Patient Practice, I am remembering how I have learned to move my queer black body and listening to who I learned from, alongside.

Queer dancing black body at night with spirit and kin alongside

We were together tequila on the floor
Gin on tongues

And spark of interest

Who is this guy?

The wild
The ancient
The naming of ourselves

Rhythm that didn’t prescribe it self

Or lucky rides with friends with cars

Or alongside with two others
We flank ourselves

Text me when you get home