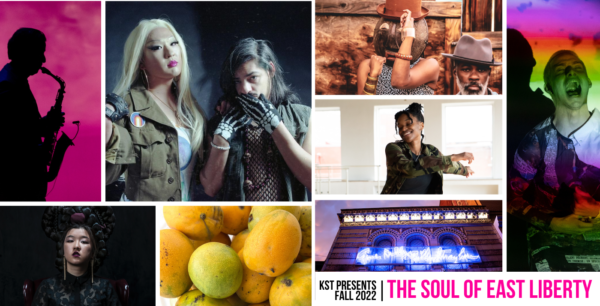 EAST LIBERTY, PA — The soul of a community lives in the spaces where people create, share experiences, and care for one another. Kelly Strayhorn Theater celebrates The Soul of East Liberty with a Fall 2022 season that centers the KST community and asserts our collective right to control our stories, our bodies, and our futures.

This season, KST will debut work from locally and nationally recognized artists. On September 17, a new partnership with BOOM Concepts populates the Lobby of Kelly Strayhorn Theater with visual art by J. Thomas Agnew, D.S. Kinsel, and J.L. Mallis. Later that evening Fully Expressed, a concert of local lyricists curated by and featuring emcee Adam “FRH” Golden, welcomes audiences into KST to kick off the season! Friday and Saturday, September 23 and 24 , we welcome 7NMS | Marjani Forté-Saunders and Everett Saunders home to present Prophet: The Order of the Lyricist, a new dance-theater work tracing the journey of the emcee. The Alloy School is also back in September with an eight-week session of professionally-led classes including Hip Hop, West African, Jazz Ballet, Creative Play and DanceFit.

The month of November continues with Boston-based The Theater Offensive’s Gow of a Rosde on November 18 – 19. Gow of a Rosde celebrates the perseverance of QTPOC femmes in the midst of a pandemic and cultural uprisings. Through choreopoems, an ensemble of four queer Black and brown women bring to light and confront complicated realities within their lives. November’s creative momentum peaks at Suite Life, KST’s annual celebration of our namesakes Billy Strayhorn and Gene Kelly. Finally, in December we welcome Freshworks artist Michelle Johnson to close out the season with a musical tribute to Diana Ross.

It is more vital now than ever that Kelly Strayhorn Theater stoke creative experimentation, community dialogue, and collective action rooted in the liberation of Black and queer people. This fall, join us in proclaiming The Soul of East Liberty.