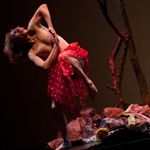 A leaf blower, a wasteland, and magnificent dance.

A former company member at Dance Alloy Theater, Andre Koslowski is no stranger to the KST stage. He has premiered dynamic dance theater work at KST many times under his company Pennsylvania Dance Theatre—most recently at newMoves Contemporary Dance Festival this past October. Now, he and Pennsylvania Dance Theatre return as TanzTheater Andre Koslowski with renowned Swiss dance-maker Leonie Stein, former head of the Y Institute at Bern University of the Arts, to rework their 2013 Wiegenlied.

Wiegenlied, German for lullaby, takes place in a damaged landscape occupied by dead trees and trash. The dancers perform solo, often with their eyes closed, like lonely people who are dancing to comfort or calm themselves.