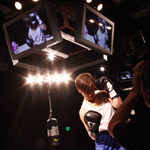 Meet Dee Crosby, a world champion boxer taken down in her prime by her own husband. Now, Dee is hellbent on redemption — no matter what the cost. Fast-paced and heartbreaking, The Wholehearted is theatre with the impact of a prize fight, a ruthless look at violence in sports — and in the name of love. Spectators sit ringside for a performance that combines high-octane fight choreography with the tuneful showmanship of Elvis Presley and the live-action camera work of a sporting event. The experience ricochets between intimate live performance and larger-than-life video on Jumbotrons above the stage as Dee’s tale hurtles tragically to the rhythm of the American Dream running off the rails.

“There’s a certain narrative arc that often accompanies stories about female victims of domestic violence. But there’s nothing typical about the storytelling in The Wholehearted.”

The Wholehearted is a one-woman theatre piece that combines fight choreography, live music, and live-action camera work. Its narrative examines violence in the context of love and sexuality in the context of sports; the main character, Dee Crosby, is a fictitious female boxer inspired by the biographies of iconic women in athletic history. The piece promises to evade the typical narrative arc that often accompanies stories about female victims of domestic violence.

Stein | Holum Projects  (SHP) is the ongoing creative partnership of playwright/director Deborah Stein and perfomer/director Suli Holum. Drawing on over a decade of experience in both experimental and regional theatre, SHP works with a core group of accomplished designers to create a unique hybrid of the highly visual and dexterously verbal; interdisciplinary physical theater with complex and nuanced characters. Their first play, Chimera, was developed with a HARP residency and premiered in 2012 at HERE as part of Under the Radar, where it was a NY Times Critics’ Pick and nominated for a Drama Desk Award for Outstanding Solo Performance. The Wholehearted, premiered at ArtsEmerson in April 2014 and their next work, Movers + Shakers, will be workshopped this summer at New Dramatists and Berkeley Rep’s Ground Floor.

The Wholehearted was developed in part during a Creative Community Residency at The Alloy Studios in July 2013.