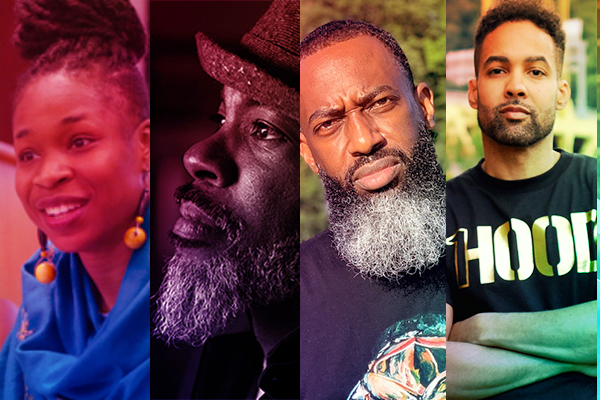 7NMS | A Literary Cypher is a dialogue being held virtually between Artist and Emcee, Everett Saunders, music producer, Rahaman Kilpatrick, multidisciplinary artist and choreographer Marjani Forté-Saunders, and Jasiri X of 1Hood Media. Guided by Everett Saunders, participants will consider the craftsmanship and life-journey of Emcee-hood as they affirm the multigenerational impact of Hip Hop culture and its place within the canons of classic American and African Diasporic literature, etymology, and art. Using “fishbowl” and cypher technology attendees will be invited to join a facilitated dialogue with their questions, inquiries, and perspectives. This conversation takes place as a point of field research for the forthcoming book The Prophet Anthology written by Everett Saunders.

7NMS| E + M is the work of collaborative music and dance duo Everett Saunders and Marjani Forté-Saunders, now operating bi-coastally (Pasadena,CA and New York, NY). They are students and descendants of black liberation movements, and radically engage music and dance forms as alchemic mediums of elevation, healing, and futurity. Their latest work is A Prophet’s Tale: Portrait of the Lyricist is a multi-year Film, Literary, Music, and Performance Project, discussing the life-journey, the mystic pilgrimage, of Hip Hop music’s Emcee/Lyricist. The project marks their eighth collaboration, and is an awardee of the MAP Fund 2020 and New Music USA Award 2020. 7NMS are also the architects behind Art & Power, a platform dedicated to Black Purpose and Innovation, fueling their initiative behind #SatelliteResidencies, and a burgeoning network of Black radical experimenters and innovative critical thinkers. Both Marjani and Everett are thrilled to be returning to Kelly Strayhorn Theatre and the East Liberty community to develop and share A Prophet’s Tale. 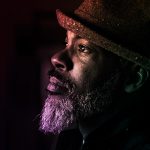 Everett Saunders is the founder and creative director of Flux Innovations, a digital media services company. Their recent clients include PBS, Sony Music, and Columbia Records. Saunders is a Composer, and Sound Designer specializing in collaborative processes, score and soundscape development for theater and film, with an adjacent practice in audio post-production and multi track board operation. His latest and ongoing work in the production Memoirs of a… Unicorn, received a 2018 Bessie Award for Outstanding Production, and will be resurrected and reimagined in the upcoming Memoirs of a Unicorn Film: a Visual Interpretation (Dec 2020).

Saunders is a two time New Music USA grant awardee, first supported to research and develop a 3-Dimensional Binaural Soundscape and Score for the performance work being Here…/this time, and later featured as 1 of 5 installations exhibited at the Museum of Contemporary African Diaspora Art (Brooklyn, NY), funded by the SURDNA Foundation Thriving Cultures Grant. His recent work can be found within Urban Bush Women’s 2018 production of Hair & Other Stories, and as a composer and sound designer on choreographer Jaamil Kosoko’s multi-platformed project, Chameleon.

As a community organizer, Saunders formerly served as an interim Director of Operations and Programs at the Alkebulan Cultural Center, instituting new programs and projects working with artists, Youth, and adults to galvanizing community through the arts, and is a founding architect behind the emerging platform, ART & POWER (2018) a radical vanguard dedicated to Black purpose and Innovation.

Anchored in a steady collaboration with partner and choreographer Marjani Forté-Saunders (2020 FCA Awardee), and now emerging as 7NMS| Everett Saunders & Marjani Forte), the duo has produced 7 award-winning works over the last 10 years. They’ve begun research and development on 7NMS| A Prophet’s Tale, marking a visionary evolution in their collaborative process and exploring the journey of Hip Hop’s infamous Lyricist, through the weave of his own triumphant biographical story as an Emcee. A Prophet’s Tale has been awarded residencies at BARD College, The Petronio Residency Center, Baryshnikov Arts Center, The Yard, and Brooklyn Academy of Music. 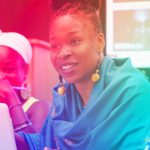 Marjani Forté-Saunders is a choreographer, performer, educator, community organizer, and mother. She refers to dance and embodiment as her sorcery—revolutionary, transformative, wild, ancient, and fresh. Her practice is informed by years in anti-racist organizer training and as a lead facilitator with Urban Bush Women’s (UBW) Builders, Organizers and Leaders through Dance.

She is anchored in a steady collaboration with partner and composer Everett Asis Saunders. Working together as 7NMS, their project A Prophet’s Tale has been awarded residencies at Bard College (2019), Baryshnikov Arts Center (2019), Petronio Residency Center (2019), and The Yard (2020). The two are founding directors of ART & POWER, established in 2018, an emerging platform for artists, writers, scientists, spiritualists, and scholars dedicated to Black Purpose and Innovation.

She is a 2020 recipient of the Foundation of Contemporary Arts Grants for Artists Award. She is one of 21 Black Womyn and Gender Non-Conforming artists curated by Eva Yaa Asantewaa, now operating as the collective Skeleton Architecture, to receive the 2017 Bessie Award for Outstanding Performance, and a 2x Bessie Award winner for her latest work Memoirs of a… Unicorn (Outstanding Visual Design & Outstanding Production).

Marjani is an Inaugural fellow of the UBW Choreographic Center, the Jerome Artist Fellowship, and the DanceUSA Fellowship, as well as a 2 time Princess Grace Foundation awardee. In 2018, she was an Artist-in-Residence at the University of Southern California Glorya Kaufman School of Dance. Her work has been incubated in residencies at 651 ARTS, Brooklyn Arts Exchange, the Lower Manhattan Cultural Council, the Maggie Allesee National Center for Choreography, and Movement Research. Her latest work, Memoirs of a.. Unicorn recently had its international premiere in Brussels, Belgium at the Beursschouwberg Festival. 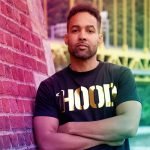 Jasiri X is the first independent Hip-Hop artist to be awarded an Honorary Doctorate, which he received from Chicago Theological Seminary in 2016. This recognition grew out of the spiritual/political urgency and artistic vision he shared on songs like “Justice For Trayvon” and “Strange Fruit”, which documented the unjust police killings of young Blacks in the Millennial Generation. Likewise, he has been deeply involved with the national Movement for Black Lives, working with organizations like The Gathering for Justice, Blackout for Human Rights, Justice or Else, BYP100 and Sankofa. Still, he remains rooted in the Pittsburgh based organization he founded, 1Hood Media, which teaches youth of color how to analyze and create media for themselves. His critically acclaimed album Black Liberation Theology (2015) has been recognized as a soundtrack for today’s civil rights movement. He has performed his music from the Smithsonian to the Apollo Theater and has discussed his views on Hip-Hop, race, and politics at leading institutions across the nation, including Harvard University, University of Chicago, NYU, Yale, and Stanford, among others. Beyond his work nationally, Jasiri’s focus on social change has also touched the global arena. In 2016, he was commissioned by The Open Society Foundation to travel to Columbia to create a film (War on Us with Grammy Award-winning hip-hop artist Rhymefest) that highlights the international effects of US drug policy in South America. One of the most important political voices of his generation, in 2017 he received the Nathan Cummings Foundation Fellowship to start the 1Hood Artivist Academy. Jasiri is also a recipient of the USA Cummings Fellowship in Music, the Robert Rauschenberg Foundation Artist as Activist Fellowship and the President’s Volunteer Service Award. 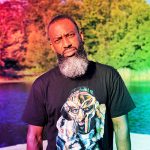 Rahaman “Kil” Kilpatrick is a music producer, relationship coach, and screenwriter and Community & Family Engagement Senior Manager for Horton’s Kids. Kil has worked with youth in Southeast Washington, DC for more than 20 years & lives in Waldorf, Maryland with his wife, Tanya, and daughter, Naomi. Kil is originally from Philadelphia, PA and earned his B.A. at Morgan State University in Baltimore, Maryland in telecommunications.
.