Jesse B. Simple Alive in Harlem 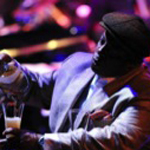 “Ade” Anthony Thompson gives voice to the everyman Jesse B. Simple. The performance places Jesse B. Simple where his creation by Hughes first took place, at Paddy’s Bar, a café in Harlem. Jesse B. tells his tales in high humor but sometimes they hit as sharp as the corns on his feet, which he is known to complain about. Over a glass of beer he expresses his concerns regarding politics, religion and being black in America. Simple charms his audience by dancing and singing his favorite jazz and blues tunes.

Ade’s characterization of Jesse B. Simple has won him much acclaim as a well-polished solo performer. Capturing the gentle soul of Simple, the success of this actor’s performance is linked to his passion for Hughes’s literature. His ability to capture the gentle soul and emotions of Simple is one of artistry grown out of his passion and commitment to the preservation of Langston Hughes “Simple Tales.”