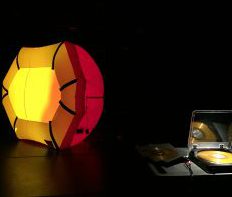 “Protean, often funny, and somehow the audience’s ally. He typically offers a wry and compassionate, if sometimes barbed, take on contemporary issues.”—American Theatre

World Premiere KST Commission
For his latest work, award-winning director/designer/performer Thaddeus Phillips teams up with critically acclaimed actor Ean Sheehy to deploy an assemblage of custom-crafted inflatable scenery that expands, contracts and collapses as he explores a universe of creation and destruction. Starting with a reprinted edition of Carl Sagan’s legendary Golden Record—humanity’s most viable message to other worlds, launched into space in 1977—Phillips theatrically examines a selected archival history of life on earth.