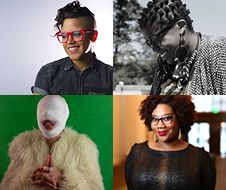 SUNSTAR hosts performances, talks, workshops, parties, a film screening and more—serving as a visionary convening that celebrates the creative contributions of women in the arts, entrepreneurship and community.

REGISTER NOW!
Or click on the event links below for individual event registration. Passes and events are all “Pay What Makes You Happy!”

THURSDAY, MARCH 10, 2016
11:30am-1:00p at KST’s Alloy Studios, 5530 Penn Avenue
Amy Novak :: SUNSTAR Kick Off :: A Conversation with Amy Novak of Google
Join the most senior ranking woman in Google’s Pittsburgh office for a conversation on career development, coaching and creating collaborative networks during this interview-style event and luncheon.

FRIDAY, MARCH 11, 2016
10:00am-11:30am at KST’s Alloy Studios, 5530 Penn Avenue
Ayana Ledford :: Value, Negotiating with Power
In a highly interactive discussion, learn the importance of negotiating, develop skills to see beneath the surface of apparent conflicts, and gain a framework for analyzing and shaping negotiations.

8:00pm-9:00pm at Kelly Strayhorn Theater, 5941 Penn Avenue
Aria Lynn Copeland :: As Bright as YOU: The trials, dreams, and truths of black trans women
Young black trans women across the nation struggle with their self worth. Take an in­depth look into the issues impacting their self esteem and self image, asking “What does healing look like for black trans women in America today?”

SATURDAY, MARCH 12, 2016
NOTE :: Bekezela Mguni :: SUNSTARS in the Making has been POSTPONED
An intergenerational conversation focusing on youth and adult artists about the passion and pursuit of a life of your own design. Honor the creative, the unique, the weird, the courageous parts of yourself that are inspired to change the world!