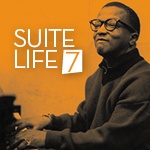 Celebrating the life and legacy of a jazz legend

Join us in recognizing internationally acclaimed pianist, composer and Pittsburgh-native, Billy Strayhorn. During more than 30-years of collaborating with Duke Ellington, Strayhorn wrote such great tunes as Take the A Train and Lush Life. The seventh annual Suite Life: A Billy Strayhorn Birthday Bash features a fantastic evening of classic Strayhorn compositions and birthday cake for all.

Suite Life celebrates the life and legacy of pianist, composer, and KST namesake Billy Strayhorn. Strayhorn, who would have turned 99 this year, is now considered one of the greatest composers in the history of American music.

As a Billy Strayhorn tribute, Suite Life tips its hat to a by-gone era of American music, but in true KST fashion, the evening also looks to the future. C Street Brass — a youthful brass quintet currently in residence at Carnegie Mellon University.

The concert begins at 8 p.m. Doors open at 7 p.m. for a pre-show mixer with complimentary drinks and light refreshments. Tickets are $15 for students and artists, $20 for residents of ZIP code 15206, and $25 general admission.

The concert and mixer are preceded by the Count Off VIP reception. For $75 per person, Count Off attendees will be treated to hors d’oeuvres, a champagne toast, and additional live performances. Count Off begins at 6 p.m. Cocktail attire requested.