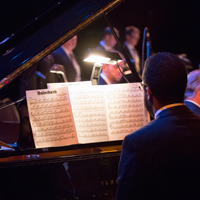 For one night only, the iconic, Roger Humphries and the RH Factor accompanied by sensational jazz and opera singer Anqwenique Wingfield and special guest Tania Grubbs join the Kelly Strayhorn family paying tribute to the renowned jazz legend and KST namesake, Billy Strayhorn. The celebration kicks off with a special Suite Life Social + Benefit supporting KST Family programing. Afterwards put on your dancing shoes as we celebrate the 101st birthday of Billy Strayhorn with extraordinary renditions of Strayhorn classics throughout the night for our Suite Life Tribute Concert.

Visual artist Charlotte Ka will be exhibiting a selection of works inspired by Billy Strayhorn at both the Kelly Strayhorn Theater and KST’s Alloy Studios.

The 9th Annual Suite Life is a celebration of the life and legacy of pianist, composer and KST namesake Billy Strayhorn. Strayhorn grew up in PIttsburgh’s Homewood neighborhood, studying music at an early age, joining musical ensembles, performing for local radio station and writing music before finding his way into the world of jazz!

The evening is not only a celebration of Strayhorn’s catalogue, but a tribute to the continued influence of Strayhorn’s work on artists today. In an effort to ensure that Strayhorn’s work inspires generations yet to come, proceeds from Suite Life benefit the Strayhorn Legacy Fund, supporting youth and family programming at KST.