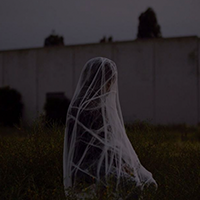 “A carefully selected body of work responding to what it means to be Black in the 21st Century.” —CCH Pounder

Co-Presented with Miller Institute for Contemporary Art
With afrofuturist, afro surrealism and magical-realist aesthetics, the experimental short films in Black Radical Imagination highlight new stories from within the African diaspora. Fugitive Trajectories is the latest edition in the series, and this program meditates on the various ways Black people attend to their lives, despite traumatic histories—both personal and collective—and a troubling present. In addition to films curated by Jheanelle Brown and Darol Olu Kae, live performances by Pittsburgh luminaries share the stage to invoke powerful expressions of grief, kinship and the dynamism of Blackness and Black culture.

Co-founded by Erin Christovale and Amir George, Black Radical Imagination is a touring program of visual shorts that delves into the worlds of new media, video art and experimental narrative.

Fluid Frontiers by Ephraim Asili (23:00)
The fifth and final film in an ongoing series of films exploring Asili’s personal relationship to the African Diaspora. Shot along the Detroit River, Fluid Frontiers explores the relationship between concepts of resistance and liberation exemplified by the Underground Railroad, Broadside Press, and artworks of local Detroit Artists. All of the poems are read from original copies of Broadside Press publications by natives of the Detroit Windsor region and were shot without rehearsal.

The Ancestors Came by Cecile Emeke (5:00)
The Ancestors Came’ is a short film exploring the life and work of prolific artist Faith Ringgold by eschewing linear narrative and drawing connections within her collection of works, in order to hint at a larger narrative that is weaved throughout.

Garden by Alima Lee (5:00)
Garden focuses on black women’s healing and daily rituals in order to overcome anxiety & depression on a daily basis. Our protagonist struggles, yet persists to honor herself by accomplishing tasks that seem mundane but are essential for her survival.

Copper by summer mason (5:00)
Copper is an experimental film exploring Black Death. While the project was made with ambiguous intentions, its origins begin with the conversation of gender. Copper is a intimate goodbye to the artist’s Black femininity. Each stage of grief takes time in the film to depart from a Black feminine body and transition into a gender non-conforming body and later to the body of a young sensitive black boi.

Rebirth is Necessary by Jenn Nkiru (10:00)
This film explores the magic and dynamism of Blackness in a realm where time and space are altered. The now, the past & the future are rethought and reordered to create something soulful and mindbendingly visceral. Unfolding through the gaze of Jenn Nkiru, it is an audio – visual feast which pulls on broad yet unique sound and visual references to push the story forward. The soundtrack features music and sounds from James Baldwin, Sun Ra, Chance The Rapper, Donnie Trumpet & The Social Experiment, Rotary Connection, Pharaoh Sanders and Shafiq Husayn. It also includes quotes and moments from Alice Coltrane, Audre Lorde, Kwame Nkrumah, Sun Ra and James Baldwin.

Mugabo by Amelia Umuhire (7:00)
A short experimental film about a young girl’s return to the idealized homeland, a place full of borrowed memories.

Under Bone by dana washington (5:00)
A narrated experimental-drama featuring ethereal vignettes linked by a woman’s devotion, grief and ancestral evocation, as she traverses stories beneath her rib cage.