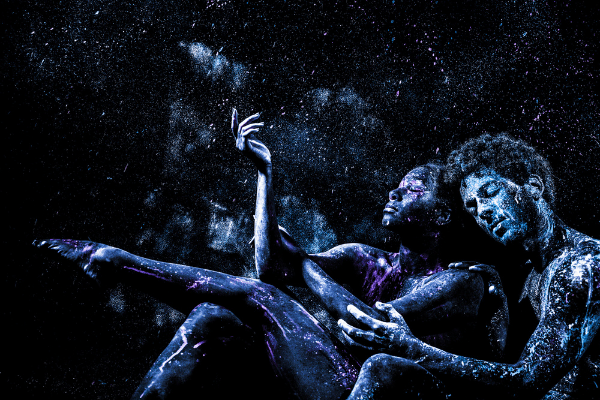 Obi Mbu (The Primordial House): An Igbo Creation Myth (2021) is a 30-minute experimental film that captures the movement of dancers illuminated with fluorescent paint and ultraviolet light as they enact an Igbo-Nigerian myth of creation. The story follows Eke-Nnechukwu and Chukwu (the femnine and masculine polarities of the cosmos) as they move from existing in perfect unity in and as the Blackness of space to a stage of conflict and separation that allows our world to come into existence. The Pittsburgh-based creative team includes Co-Directors Mikael Owunna and Marques Redd; Movement Director Ursula Payne; Dancers Corey Bourbonniere and Victoria Watford; and Sound Designer Herman Pearl (Soy Sos). After successful screenings in New York City, Los Angeles, and Raleigh, Obi Mbu makes its Pittsburgh debut at the Kelly Strayhorn Theater. Prepare to be enraptured and entranced by this fantasia of dance and ritual performance.

The filming of “Obi Mbu (The Primordial House)” was made possible with the support of the Advancing Black Arts in Pittsburgh Grants Program, a partnership of The Pittsburgh Foundation and The Heinz Endowments. 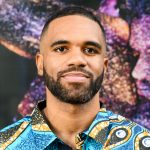 Mikael Owunna (Director) is a queer Nigerian-American multi-media artist and engineer. Exploring the intersections of visual media with engineering, optics, Blackness, and African cosmologies, Owunna’s work has been exhibited across Africa, Asia, Europe, and North America and been collected by institutions such as the Nasher Museum of Art, Museum of Fine Arts Houston, Equal Justice Initiative, Duke University Pratt School of Engineering, and National Taiwan Museum. His work has also been featured in media ranging from the New York Times to CNN, NPR, VICE, and The Guardian.  He has lectured at venues including Harvard Law School, World Press Photo (Netherlands), Tate Modern (UK), and TEDx. Owunna has published two monographs: Limitless Africans (FotoEvidence, 2019) and Cosmologies (ClampArt, 2021). 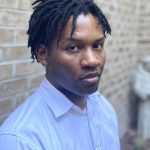 Marques Redd (Director) is a traditional African cosmologist, independent scholar, and multi-media artist. Redd’s published academic essays include “Astro-Black Mythology: The Poetry of Sun Ra” and “Those Mysteries, Our Mysteries: Ishmael Reed and the Construction of a Black Esoteric Tradition,” and he has contributed essays for arts institutions and galleries including ClampArt, Silver Eye Center for Photography, and Women of Visions. In October 2021, he and Owunna launched a public art collaboration with the Pittsburgh Symphony Orchestra entitled “Playing the Cosmic Strings,” and they are working on a series of glass sculptures that will be exhibited at the Pittsburgh Glass Center in 2023. Redd is also currently writing  a scholarly text entitled Ancient Origins, Future Destinies: Blackness, World Creativity, and the Word. 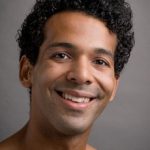 Corey Bourbonniere (“Chukwu”), a native of Woonsocket, Rhode Island, joined Pittsburgh Ballet Theatre as a professional dancer in 2012. Before joining PBT, Bourbonniere trained with the State Ballet of Rhode Island and Heritage Ballet in Rhode Island, as well as the Pittsburgh Ballet Theatre School Graduate Program. He also attended summer programs at the American Academy of Dance and Texas Ballet Theater. Corey received the honor of being named one of Pointe Magazine’s Standouts of 2018 for his portrayal of Bernardo in Jerome Robbins’s West Side Story Suite. He then went on to play the same role in Francesca Zambello’s full length West Side Story at the Glimmerglass Festival in Cooperstown, New York. Among his many PBT performances, Corey’s favorites include Jiří Kylián’s Petite Mort, as well as featured roles as a Stomper in Twyla Tharp’s In The Upper Room, the Third Sailor in Jerome Robbins’ Fancy Free, and Drosselmeyer in Terrence S. Orr’s The Nutcracker. 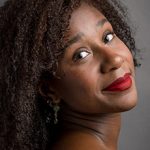 Victoria Watford, (“Eke-Nnechukwu”) of Cleveland, Ohio, joined Pittsburgh Ballet Theatre as a professional dancer in 2016 from the PBT School Graduate Program, where she trained since 2014. Prior to PBT, Watford completed several summer intensives at PBT School, trained with the Cleveland School of Dance for more than 10 years and performed with Cleveland Youth Ballet Company in Diamonds, Don Quixote, The Nutcracker and other works. With PBT, Watford has performed in Giselle, The Sleeping Beauty, The Nutcracker, Beauty and the Beast, La Bayadère, Western Symphony, Peter Pan and on tour at the 2015 Chicago Dancing Festival in Mark Morris’ Sandpaper Ballet. 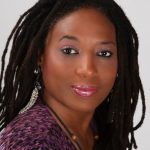 Ursula Payne (Movement Director) is the chairperson of dance at Slippery Rock University. Payne is a graduate of The Ohio State University where she received her MFA in Dance with specializations in Performance and Direction from Labanotation Score. Payne formed Mills and Payne dance company with Tiffany Mills and performed in various dance festivals and professional venues in New York City, Toronto-ON, Memphis-TN, Dallas-TX, and Eugene-OR. In addition to her work with Mills and Payne Dance (1995-2000), Payne performed as a dancer with Diane McIntyre in the film “The Beloved” and in McIntyre’s evening length work “Love Poems to God” which premièred at BAM. Since 2000, Payne has received four Pennsylvania Council for the Arts choreographic fellowships and numerous commissions from universities and dance companies. 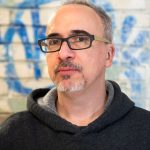 Marquita Sams (Movement Consultant) received a BA in Dance and 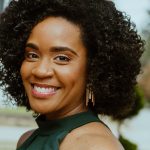 African American Studies from Washington University in St. Louis and a MFA in Dance from the University of Wisconsin-Milwaukee. She has performed with Cecil Slaughter’s The Slaughter Project, Philadanco D/2, Project Motion, Ko-Thi Dance Company, and Wild Space Dance Company.  She worked as the assistant to the Founder of Hattiloo Theatre in Memphis and choreographed “Crowns” the Musical during her tenure there.  Sams has also choreographed and performed solo work at the Milwaukee Art Museum, the Drucker Center in Chicago, the Kenilworth Arts Studios in Milwaukee, and the Tubman Museum and in Macon. Sams is a certified Reiki Master and offers healing services through Much Joy Healing Studio. 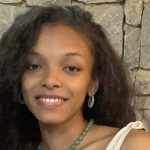 Isabelle Analo (Production Assistant) is a Nigerian American multi-media artist based in Los Angeles, California. She has creative directed and photographed for multiple companies and organizations across Nigeria and America. Her photography placed as a finalist in the Sony 2021 World Photography awards. She served as the production assistant for the experimental dance film, Obi Mbu: Primordial House (2021) which has screened in galleries and museums in New York City, California, and Raleigh, with an upcoming 2022 film tour. Analo continues her creative pursuits as a freshman pursuing a BA at the USC School of Cinematic Arts.