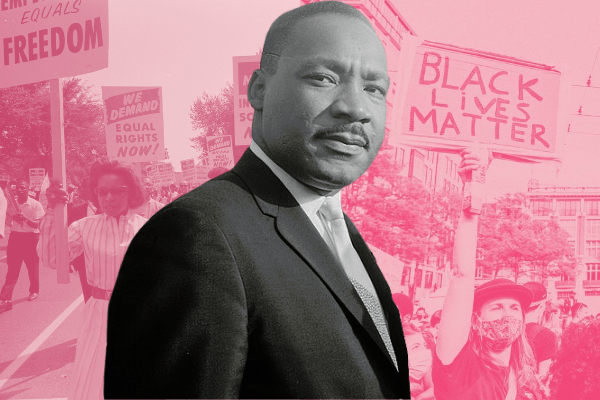 KST is excited to work in collaboration with BOOM Concepts to curate this event. This year’s theme, “Give Me Liberty,” explores using our voices for justice. Inspired by the work of Dr. King and the many civil rights activists fighting for equality then and now, we’ll have engaging activities and performances that will highlight the multitude of ways we can use our voices and stories to transform the world.

BOOM Concepts is a creative hub based in Pittsburgh dedicated to the advancement of POC and LGBTQIA creative entrepreneurs. BOOM Concepts serves as a space for field building, knowledge sharing, peer to peer mentorship, and storytelling.

BALAFON West African Dance Ensemble is a performing ensemble that also offers immersive movement and musical programs. Experience African culture up close. Explore rich Guinean traditions, and a taste of classical arts from other areas of West Africa and beyond.

Chanel Blanchett is multi-disciplinary theatre artist dedicated to creating visibility for those who are unseen by the movements they create and the societies they exist within. In addition to her current role as Programming Manager at Kelly Strayhorn Theater, she is a writer, director, and teaching artist with a focus in devised performance. Chanel’s work both creatively and administratively centers around making space for voices and bodies in more rooms, with a special interest in empowering and creating opportunities for black women and black youth. From 2015 to 2020, Chanel worked with Children’s Theatre of Charlotte, advocating for more diversity and equity in programming through her role as a teaching artist and theatre director. From 2019-2021, while earning her MFA at Sarah Lawrence College, she spoke on several panels to promote greater diversity, equity, and inclusion in the arts. As a freelance director and creator, she has worked with a range of organizations from the Creator’s Collective to Actor’s Theatre of Charlotte, to universities and colleges.

Trevor C. Miles is a powerhouse teaching artist and performer hailing from Pittsburgh, Pennsylvania.For over a decade, he has focused his work on underrepresented youth and their narratives. As a solo artist, it has been his mission to tell honest stories through a POC, queer lens. He describes his choreography as both aching and celebratory. Trevor’s solo work deals with identity and escapism. For years, Trevor offered his dance classes free of charge to youth of all ages. In 2013, he was awarded an NAACP Community Service award for his efforts in providing challenged neighborhoods with performing arts. In 2014, Trevor formed his own hand-selected group of dancers to take his storytelling to the next level, Trevor C. Dance Collective. Since then, Trevor has created 20+ unique stage works, premiered a self-created documentary, performed across the country with multiple companies, completed four tours, earned multiple theater residencies, and he has garnered acclaim as a solo artist, being selected to sit on various prestigious grant panels. He is one of Pittsburgh’s most captivating storytellers. From Movement to Media is Trevor’s newest slogan, after launching TrevorCMedia in 2021, a production company that creates art for various demographics. Products include podcasts, literature, stage performances, photography, and videography.Trevor is looking forward to releasing a short dance film with TrevorCMedia soon, snippets of which will be teased at KST’s My People 2021.Trevor plans to continue spreading his energy and aesthetic to the masses. TrevorCDance.com.

Dominique Scaife is the owner and creator of Kool Image Dolls® and Dominique Scaife Art. A self-taught, figurative sculptor, doll customizer and doll designer, she works with dolls, clay, and acrylic impasto art techniques, to create figures that embody her African American heritage and encourage confidence. Dominique was born, raised, and is currently practicing art and the start up of Kool Image Dolls® in Pittsburgh Pennsylvania, USA. Dominique is an entrepreneur, sculptor, and storyteller who through her practice encourages self-expression and pride in identity. She uses her dolls, polymer clay, and acrylic paint impasto techniques to show details in skin tones, hairstyles, and to communicate the stories of her figurative pieces. Each piece is visual story of the culture. An open invitation to recognize, celebrate, and converse around issues or topics of current and past. Dominique has participated in Prototype PGH and Bridgeway Capital’s First Leap business accelerator programs. Dominique is also current member of Women of Visions Inc., ORIGINS, Pittsburgh Society of Artists Guild, and Society of Sculptors Pittsburgh.

Sierra Sellers is a powerful vocalist and a lifelong songwriter inspired by jazzy, playful melodies and soulful rhythms. Born and raised in Pittsburgh, Pennsylvania, Sierra has grown in her artistry from writing songs as a little girl, to releasing original music at the age of 19. Sierra has garnered national attention when she was named on NPR’s “2020 Slingshot Artist to Watch”. During the same year she released a five song EP titled Ophelia, which was widely discussed and praised in local publications. Sierra uses her music to inspire and uplift others. With her contagious smile and magnetic personality, Sierra’s spirit comes through her music. She is expressive, genuine, timeless.