The Men of Magnificent Motown 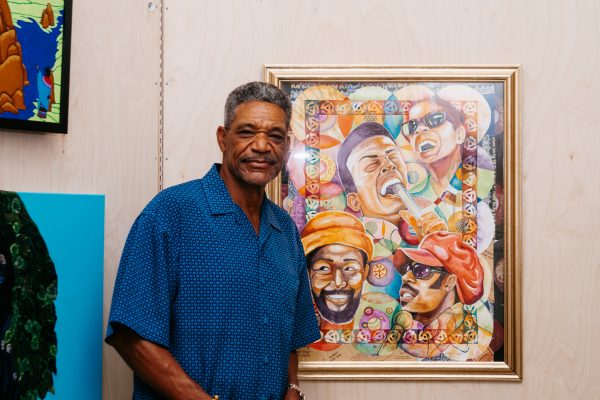 A Conversation with Women of Visions’ first time Male Collaborators

Women of Visions is a Black Women’s Visual Art Collective that was created in 1981. For the first time in their 40 year history, the collective invited male identifying artists to participate in their 2021 gallery exhibition at KST, MAGNIFICENT MOTOWN: Art Inspired by the Music. Join us for this conversation  between Women of Visions founders and some of the Black male artists featured in the show.

MAGNIFICENT MOTOWN! is made possible with support from The Pittsburgh Foundation, Bridgeway Capital, and in partnership with the Rivers of Steel Heritage Area. Funding was provided in part by a grant from the Pennsylvania Department of Conservation and Natural Resources, Bureau of Recreation and Conservation, Environmental Stewardship Fund, administered by the Rivers of Steel Heritage Corp.

Women of Visions (WoV) was co-founded in 1981 by a diverse group of African American women in Pittsburgh, Pennsylvania, looking for opportunities that had not been afforded to them in the traditional art world. In 1990, the organization was incorporated under the name Women of Visions, Inc., which achieved non-profit status in 1995. Over subsequent decades, WoV have sponsored, curated or been represented by members and former members in hundreds of exhibitions, many of national and international acclaim. In addition to our community outreach, through collaborative programming, and progressive arts opportunities, members have enriched all generations ranging from K-12 to senior adults.

​The members of Women of Visions, Inc. work in a variety of artistic mediums, which include: Painting, fiber art, collage, mixed media, printmaking, photography, ceramics, jewelry-making, and three-dimensional works. Several of our members regularly act as teaching artists and are registered with our host organization, the Pittsburgh Center for the Arts School, registered by the Pennsylvania Council on the Arts.

Ernest Bey (Inner City Blues/Superstition) has been a fixture on the art scene for over 30 years in his hometown of Pittsburgh, PA. In that time, he has had many achievements and honors. Ernest is a father, grandfather, husband, and community activist. He is a member of the Coalition against violence, a board member of the Highland Park Tennis Club, and he serves as Community Coordinator for Mad Dads, a National Organization that patrols their neighborhoods to make them safe.

Norman Brown (Ain’t No Mountain High Enough), the 9th of 10 children, was raised in Pittsburgh’s Hill District, and graduated with a degree from the University of Pittsburgh in education, although as an artist, he is self-taught. His hope is that his artworks will evoke some eyebrow lifting, some smiles, and laughs. but also a sense of wonder, and maybe mystery. His muse is his love of color and fantasy and the appreciation of the talents and the creative genius of all so-called primitive cultures. His works are part of many private and corporate collections in Pittsburgh and around the country.

Darrell Kinsel (Everybody Needs Love) is a Black creative entrepreneur and arts administrator. He expresses his creativity through the mediums of painting, window display, installation, curating, action-painting, non-traditional performance, and social media. While Kinsel’s primary practice is painting, he believes that experimenting in other disciplines will ultimately further his development as a painter. Kinsel’s work puts focus on themes of escapism, space keeping, urban tradition, pop culture, hip-hop, informalism, and cultural appropriation.

Painter, spoken word artist, and entrepreneur, Corey Carrington (What’s Going On?), from Pittsburgh’s Northside, is also the impresario of a newly minted gallery and studio known as Deeper than Grits. His performance and visual art have been seen at the August Wilson Center, Carnegie Museum of Art, Kelly Strayhorn Theater, Wood Street Galleries, Greater Pittsburgh Arts Council, BOOM Concepts, and The University Gallery/Frick Fine Arts Building. He received his B.S. in Communication and Creative Writing from Slippery Rock University in 2011. Professionally, Corey has been a changemaker with organizations such as Allegheny Youth Development, Partner 4 Work, Contemporary Craft, and the Urban Academy of Greater Pittsburgh.

Aaron J. Johnson, Phd, is Assistant Professor at the University of Pittsburgh where he studies and teaches jazz, funk, film music, and MIR (music information retrieval). He studies social aspects of how music is produced, organized, and presented, the efforts of musicians to counter powerful institutional forces, and how musicians use media of all kinds. A professional jazz musician born and raised in Washington, DC during the apex of the Chocolate City era, he has electrical engineering degrees from Carnegie Mellon (BSEE) and Georgia Tech (MS) and a PhD in Music from Columbia University. He plays trombone, tuba, bass clarinet, and conch shells. The many musicians with whom he has performed or recorded include Jimmy Heath, Wallace Roney, Steve Turre, Victor Gould, Charles Tolliver, McCoy Tyner, Pharoah Sanders, Jay-Z, Martha Reeves and the Vandellas, Aretha Franklin, Gladys Knight (with and without the Pips), Oliver Lake, Muhal Richard Abrams, the Jazz at Lincoln Center Orchestra, the Smithsonian Jazz Masterworks Orchestra, and the Mingus Big Band. His forthcoming book from the Illinois University Press is titled Jazz Radio America.