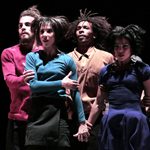 On Saturday, stay after the show for AFROHEAT 9, a dance party featuring rare and classic Afrobeat music, with a healthy dose of some of the newest Afrobeat tunes coming out of the continent today and heaps of reworked sounds from around the globe. AFROHEAT is free for all Malpaso ticket holders. More here.

They have the pristine technique but none of the rigidity that comes with that kind of training…They’re both humble and sparklingly present.

Malpaso Dance Company at The Joyce Theater in NYC, 2014