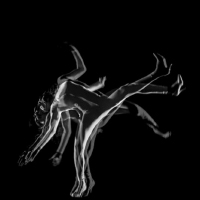 Described as “electrifying,” “fearless” and “inspirational,” internationally celebrated vogue dancer Leiomy “The Wonder Woman” Maldonado delivers one of her signature performances—the kind of trailblazing dancing that had led to Leiomy’s domination of the underground Ballroom scene for more than a decade. The evening starts off with special performances by Pittsburgh’s own LGBT performance ensemble #kNOwSHADE, in this tribute the Iconic Mother of Vogue, a highly-stylized, modern house dance that took form in the late 1980s, a form that evolved out of the Harlem ballroom scene of the 1960s.

A Bronx native, Leiomy was introduced to the dance form of voguing through New York City’s underground Ballroom Scene, an extravagant community created by impoverished Black and Latino LGBT youth to safely express themselves, and to revel in the allure of fabulous pageants and dance battles designed to mirror the wealthy lifestyles they so often dreamed of living.

This all-levels workshop is your chance to learn from Legendary Ballroom Mother Leiomy Amazon, recognized from Season 4 of “America’s Best Dance Crew” and her 10+ year domination of the Ballroom scene.

Followed by a complimentary lunch and conversation with the artist.