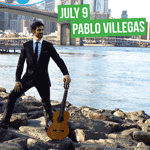 The soul of the Spanish guitar runs in Pablo Villegas’s blood. Born and raised in La Rioja, Spain – the country uniquely and deeply linked to his chosen instrument – Villegas is praised for performances as charismatic as they are intimate. With his singing tone and consummate technique, Villegas offers interpretations that conjure the passion, playfulness, and drama of his homeland’s rich musical heritage.

Mingling at 6:30p includes refreshments from The Livermore

Available in advance by phone or online, or at the door.