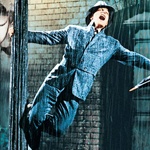 Celebrate Gene Kelly’s birthday with a little something sweet and a screening of Singin’ in the Rain (1952) starring Gene Kelly, Donald O’Conner and Debbie Reynolds. Co-directed by Gene Kelly and Stanley Donan, Singin’ in the Rain is a lighthearted depiction of Hollywood, with a production company caught up in a difficult transition from silent films to “talkies.”