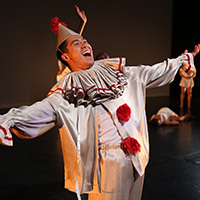 David Roussève’s dance-theatre offers a succinct and lyrical look at how the highs and lows of life collide. —The Washington Post

KST Commission
Journey from Westinghouse to the grandest bandstands across the globe, as award-winning choreographer David Roussève celebrates the life and music of KST namesake Billy Strayhorn through jubilant movement for nine performers and sumptuous video projections. Halfway to Dawn redefines “biography” as the intersection of fact, theory, abstraction and fantasy—and reveals the complicated emotional truths that shaped the life and legacy of legendary openly gay jazz composer. Strayhorn’s music is interpreted through dynamic dance that blends modern, postmodern, jazz and social dance with a eclectic score that includes selections from Strayhorn’s compositions from the 1940s and 50s. Roussève’s tribute expands upon the political urgency of Strayhorn’s vision, while channeling the spirit of the genius himself.