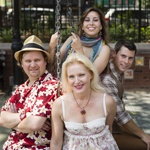 Take the potency of an amplified edgy rock band and crank up the intensity, then throw in musical improvisation, and that describes New York’s most daring string quartet sensation, ETHEL. Creating a world in which classical music has never grown distant, ETHEL finds common ground between complex experimentalism and folk-influenced Americana. The inventive string quartet is setting the standard for new music engagement.

The centerpiece of ETHEL’s touring program, Grace is the adaptation of Ennio Morricone’s moving score to the 1986 film The Mission. Morricone’s score was nominated for an Academy Award in 1986 and won the Golden Globe Award for Best Original Score. The film deals with cross-cultural complexities and potential calamities fueled by the quest for redemption against the backdrop of the jungles of South America.