“What is Democracy?” Film Screening 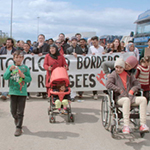 Stick around after the film for a discussion moderated by Michael Goodhart, Director of Pitt’s Global Studies Center and a Closing Night Reception! Additionally after the film, the CMU IFF is co-presenting the “A Night at the Gaslight Café Concert” at 7pm at the New Hazlett Theater. There is a separate cost for the concert.

Coming at a moment of profound political and social crisis, “What is Democracy?” reflects on a word we often take for granted. This philosophical journey spans millennia and continents: from ancient Athens’ groundbreaking experiment in self-government, to modern-day Greece grappling with financial collapse, and a mounting refugee crisis to the United States reckoning with its racist past and the growing gap between rich and poor. This urgent film connects the past and the present, the emotional and the intellectual, the personal and the political, in order to provoke and inspire. If we want to live in democracy, we must first ask what the word even means. “What is Democracy?” asks the right questions.