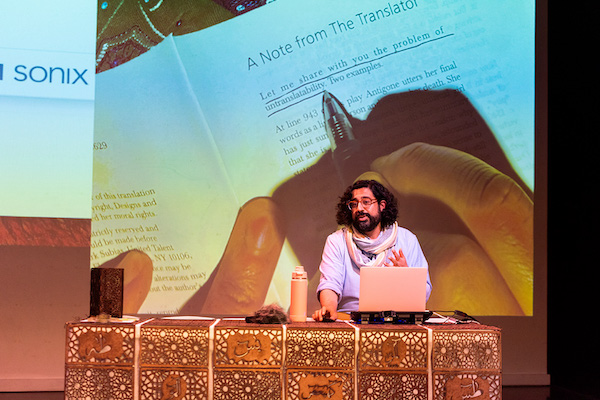 For the occasion of the national Theater Communications Group conference visiting Pittsburgh, KST is delighted to collaborate with The Andy Warhol Museum to bring back Adil Mansoor’s recently premiered Amm(i)gone! Mansoor explores queerness, the afterlife, and obligation using Sophocles’ Antigone, teachings from the Quran, and audio conversations between him and his mother in a touching performance about love across faith. Hang out after the performance for reception with Operation Sappho DJ’s.

Amm(i)gone, an adaptation of Sophocles’ Antigone, is an apology to and from a mother.

Creator and performer Adil Mansoor explores queerness, the afterlife, and obligation using canonical texts, teachings from the Quran, and audio conversations between him and his mother. Since discovering his queerness, Mansoor’s mother has turned towards her faith in an attempt to save her son in the afterlife. In an effort towards healing, Mansoor has invited his mother to join him as dramaturg and co-conspirator. In reading, discussing, and translating various adaptations of the source play, together they mine Greek tragedy, Islamic traditions, and their own memories to create an original performance locating love across faith. Can prayer substantiate care? Can care manifest as artistic methodology and inquiry? Can Mansoor and his mother contend with Antigone’s fate?

Amm(i)gone is a National Performance Network (NPN) Creation & Development Fund Project co-commissioned by Kelly Strayhorn Theater in partnership with The Theater Offensive and NPN/VAN. The Creation & Development Fund is supported by the Doris Duke Charitable Foundation, the Andrew W. Mellon Foundation, and the National Endowment for the Arts (a federal agency). For more information, visit www.npnweb.org. Amm(i)gone is additionally supported by the Frank-Ratchye Fund for Art @ the Frontier; the Point Foundation’s Andrew A. Isen Internship; The Heinz Endowments’ Small Arts Initiative; Opportunity Fund; PNC Charitable Trust; A. W. Mellon Educational and Charitable Trust Fund of The Pittsburgh Foundation; Arts, Equity, Reimagined Fund; and Dreams of Hope. 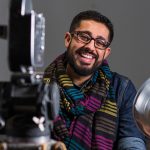 Adil Mansoor is a theatre maker and educator centering the stories of queer folks and people of color. He has developed new work with New York Theatre Workshop, The Poetry Project, Bronx Academy of Arts and Dance, Kelly Strayhorn Theater, The Theater Offensive, Tofte Lake Center, NYU Tisch, and PearlArts Studios. In addition to his own practice, Mansoor also directs new and contemporary plays including include “Daddies” by Paul Kruse (Audible), “Gloria” by Branden Jacobs-Jenkins (Hatch), “Desdemona’s Child” by Caridad Svich (Carnegie Mellon), and “Plano” by Will Arbery (Quantum).

Mansoor is a founding member of Pittsburgh’s Hatch Arts Collective and the former Artistic Director of Dreams of Hope, an LGBTQA+ youth arts organization. As an educator, he has worked with Sarah Lawrence, Middlebury College, The Mori Art Museum, The Warhol and others. He was the inaugural director with Quantum Theatre’s Gerri Kay New Voices program and a 2050 Directing Fellow with New York Theatre Workshop.