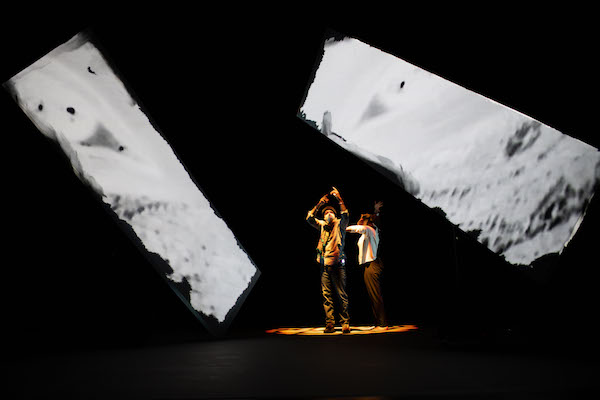 PROPHET: The Order of the Lyricist

A four-year archival, research, and multi-genre storytelling project on the life journey of a Lyricist. PROPHET: The Order of the Lyricist, illuminates the distinctive practices, systems, philosophies, and political ideologies that have shaped Hip Hop’s Emcee/Lyricists.Tracing the evolution of artist Mental from Emcee to Lyricist, 7NMS invites audiences to enter a world of mind power, bravery, self-determination, and triumph– facets of the artist’s quest for self-realization.

PROPHET makes its own imaginative evening-length performance contribution to the scholarly, civic, and ancient bodies of radical Black expression. Light and moving-image visuals as well as multi-channel audio installation will accompany the live dance and vocal performances. Such environments layering multiple media are the company’s signature aesthetic; previous work like Memoirs of a Unicorn featured a built multi-sited environment of sculpture, light, sound, movement, costume, and projection. PROPHET is an extension of this practice that acknowledges the Emcee and Lyricist’s role and presence more explicitly.

While taking its primary shape as a live performance at KST, PROPHET will also manifest as an Ethnographic Memoir, an Experimental Film, and Album.

Prophet is co-commissioned by Abrons Arts Center and Kelly Strayhorn Theater. The work has been incubated in residencies at the Petronio Residency Center and Baryshnikov Arts Center, 7NMS own Satellite Residency (in response to COVID-19) in partnership with Brooklyn Academy of Music, Abrons Arts Center, Kelly Strayhorn Theater, The Yard, and Lawrence University (2021). 7NMS work with PROPHET and their #SatelliteResidency initiative was recently featured in the September ‘20 issue of Dance Magazine.

This engagement of 7NMS: Marjani Forté-Saunders + Everett Saunders is made possible through the ArtsCONNECT program of Mid Atlantic Arts with support from the National Endowment for the Arts. PROPHET is a recipient of the New England Foundation 2021 National Dance Production & Touring award, the 2020 New Music USA Award, and the 2020 MAP Fund. 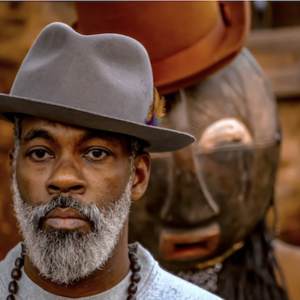 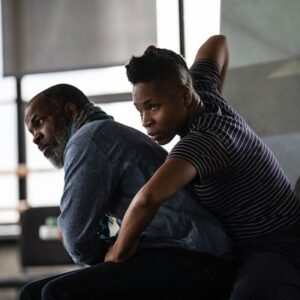 The Spaces: Mvmt, Word, & Sound
A Meditation and Movement Workshop with 7NMS 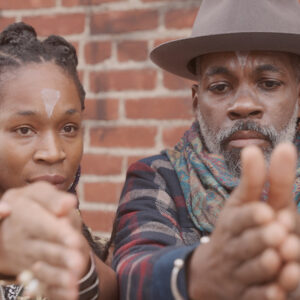 7NMS | Marjani Forté-Saunders +  Everett Saunders Operating in CA and NY, 7NMS| is the public emergence of Marjani Forté-Saunders and Everett Saunders’ work as a collaborative team, radically engaging art as a medium of elevation, healing, and futurity. With seven award-winning projects in ten years, 7NMS tote a revolutionary commitment to the Black radical imagination. PROPHET is an awardee of the 2020 MAP Fund and 2020 New Music USA Award, and the National Dance Project Production and Touring grant 2021. Marjani is a 2019 FCA Fellowship awardee, a 3x Bessie award winner, and an inaugural recipient of the Jerome Hill, Dance USA and Urban Bush Women Choreo. Center Fellowships. Everett is the composer and thought partner behind the award-winning and internationally touring production, Memoirs of a Unicorn, and a 2x New Music USA Awardee. His recent work can be found as composer/sound designer on Jaamil Kosoko’s Chameleon, mayfield Brooks Whale Fall, and Urban Bush Women’s Hair & Other Stories (2018). While incubating PROPHET through our Fall ‘20 and Winter ‘21 Satellite Residencies, in 7NMS newly erected home studios, the duo has worked in close collaboration with co-visionaries d. Sabela grimes (movement composer and sound archivist), Meena Murugesan (filmmaker & media designer), and Marc Winston (photographer), producing PROPHET’s latest filmic iteration, commissioned by Jacob’s Pillow. 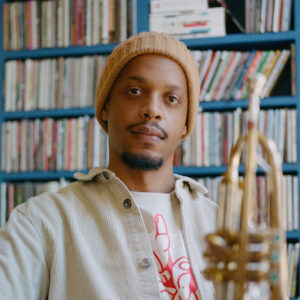 Chris Ryan Williams is an interdisciplinary artist based in Brooklyn, New York and most at home collaborating with improvisers and experimentalists. During his years in Los Angeles, Williams was mentored by multi-reedist Bennie Maupin whose teachings instilled a conviction in finding one’s own path in life through sound. Concurrently, he spent time in the community band Pan-Afrikan Peoples Arkestra. These collaborations continue to influence his musical journey as a recent addition to the New York creative community, one in which elders and young folk (in spirit, age, and experience) share a space in creation. Williams’ work explores the dyad of ancestral trauma and power existing in all Black Americans: I Ain’t Got No Spare (2019) is a modular video and performance piece that explores the rich legacy of Black music and film in Los Angeles; House of Peace (2021) is a video installation and soundscape blending fabricated and ‘real’ memories across generations; Of Yours (2020) is a free jazz setting for imagined exchanges between Black leaders. Recent grants and residencies include, Foundation of Contemporary Arts, Musik installationen Nürnburg, Atlantic Center for the Arts WasteLAnd, and MATA Festival. Williams has collaborated with Bennie Maupin, Nicole Mitchell, Fay Victor, Luke Stewart. 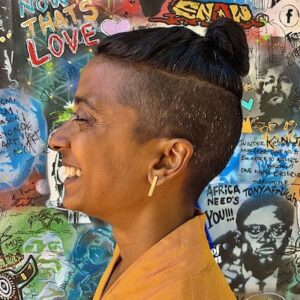 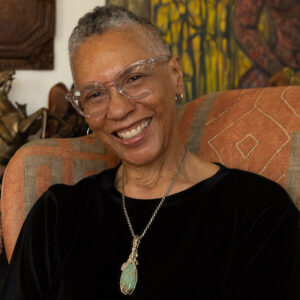 A 2022 Winner of Yale’s Windham Campbell Prize in Drama, Sharon Bridgforth is 2020-2023 Playwrights’ Center Core Member, a 2022-2023 McKnight National Fellow and a New Dramatists alum. She has received support from The Doris Duke Performing Artist Award, Creative Capital, MAP Fund and the National Performance Network. A MAP Fund Scaffolding for Practicing Artists Coach, Sharon’s work is featured in Teaching Black: The Craft of Teaching on Black Life and Literature and Mouths of Rain an Anthology of Black Lesbian Thought. Sharon’s Lambda Literary award winning, the bull-jean stories will be produced by Pillsbury House + Theatre in October/November 2022, directed by Signe Harriday. Her dat Black Mermaid Man Lady/The Show is streaming on the Twin Cities PBS platform. Sharon has served as a dramaturg for: the Urban Bush Women Choreographic Center Initiative’s Choreographic Fellowship program and is proud to be in deep process with 7NMS. More at: https://www.sharonbridgforth.com. 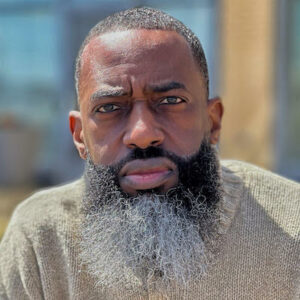 In 1984, when Rahaman “Kil” Kilpatrick was 10 years old, he saw Run DMC performing “Rock Box” on American Bandstand & he knew he wanted to be part of the hip hop culture. While other kids were asking their parents for toys for Christmas, Kil begged his parents to buy him two turntables so he could be a DJ. In 1992 Kil began attending Morgan State University & saw an article in Vibe magazine that Bobbito wrote highlighting the dopest hip hop radio shows. When he saw Morgan’s show Strictly Hip Hop 88.9 was named he knew he had to become part of that show! For the next 7 years from 1994-2001 Kil hosted Strictly Hip Hop which is currently the longest running hip hop radio show on the east coast. After graduating from Morgan State, Kil dedicated his life to helping teens in Washington DC by running numerous teen centers throughout the city. He’s gone on to become a music producer who has produced by groups such as MOP, Maffew Ragazino, RJ Payne and Pete Rock’s 1st artist signed his record label Amxxr. He also hosts by a weekly hip hop podcast Apt. 5B. 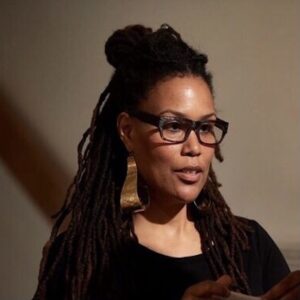 Jasmine Murrell is a Brooklyn-based interdisciplinary visual artist who employs several different mediums to create sculptures, installations, photography, performance, land art and films that blur the line between history and mythology. Raised in Detroit during its heyday as a black utopia set Murrell on the path of exploring the African diaspora and ancient craft techniques of bringing life to mundane, seemly dead material. Juxtaposing American artifacts with the products of other knowledge systems, Murrell troubles the historical record to reveal other truths and other narratives. She has exhibited nationally and internationally, in venues such as the Museum of Contemporary Art; the Bronx Museum; the Museum Contemporary Art Chicago; the Whitney Museum, the African-American Museum of Art, and the International Museum of Photography. Murrell has been a resident artist at the Bronx Museum AIM program; Baxter St. Gallery workspace; BRIClab contemporary art residency and Block Gallery workspace. Her work has been included in the book MFON: Women Photographers of the African Diaspora, and The New York Times, Time Magazine, Hyperallergic, The Detroit Times and several other publications.