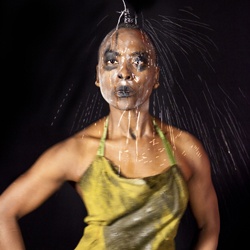 Born in Mutare, Zimbabwe and currently a resident of New York City, Nora Chipaumire has been challenging stereotypes of Africa and the black performing body, art, and aesthetic for the past decade. She has studied dance in many parts of the world including Africa (Senegal, Burkina Faso, Kenya, and South Africa), Cuba, Jamaica and the U.S.  A graduate of the University of Zimbabwe’s School of Law, Chipaumire holds an M.A. in Dance and M.F.A. in Choreography and Performance from Mills College (CA).

Recent works include The Last Heifer (2012), commissioned by Danspace Project for Platform 2012, Parallels; Visible (2011), commissioned by Harlem Stage and created in collaboration with Jawole Willa Jo Zollar; Kimya (2011), a work for Jokajok!, a female ensemble based in Kenya; I Ka Nye (You Look Good) (2010), created and performed with choreographer Souleymane Badolo and musician Obo Addy; Silence/Dreams (2010), created and performed with Fred Bendongue and named one of the ten best dances of 2010 by the New York Times dance critics; and lions will roar, swans will fly, angels will wrestle heaven, rains will break, gukurahundi (2009), created and performed with Thomas Mapfumo (selected as Best Dance Concert of 2011 by Pittsburgh Post-Gazette). She is featured in several films, including Dark Swan (dir. Laurie Coyle, 2011); the award-winning, Nora (dir. Alla Kovgan & David Hinton, 2008); and the documentary Movement (R)evolution Africa (a story of an art form in four acts) (dir. Joan Frosch & Alla Kovgan, 2006).

Nora Chipaumire worked on MIRIAM during a 2012 residency at Kelly Strayhorn Theater. In April 2013, KST and the Andy Warhol Museum co-present MIRIAM in its entirety as part of The Warhol’s “Off The Wall” series. This Pittsburgh premiere is part of KSTmoves.